I've been playing with the idea of creating a simple magnetometer which can be used for detecting times when the aurora might be visible. AuroraWatch UK already provides a service for this, with email and Twitter alerts. The AuroraWatch web pages also show how to build a simple pop-bottle magnetometer, and a compass detector, but I wanted something which could easily output digital data. Now I've found a suitable sensor, I've started building a prototype using the open-source Arduino micro-controller platform.The recent Howduino workshop at Lancaster was very helpful in finding (and fixing) a few bugs in the DHCP support. 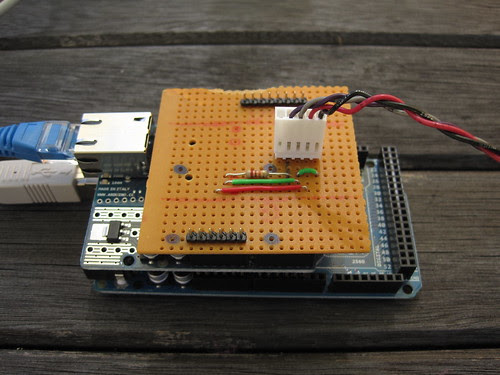 A short test at home didn't reveal much, except that cars cause far too much disturbance to the magnetic field. The next test will be at a more remote location but first I need to extend the sensor lead and add some buffering and protection circuitry. It's unlikely I'll have a network connection for time keeping so using NTP won't be possible so I'll probably add a real-time clock.
Posted by Steve Marple at 21:44