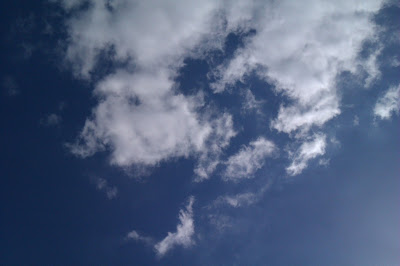 To minimise the time and effort required to test the cloud detector concept I am following the approach used for the AuroraWatchNet magnetometer system and reusing as much hardware from it as possible. The MLX90614 non-contact infra-red temperature sensor is located outside. To minimise the infrastructure requirements the sensor unit is battery-powered and transmits its data over a bi-directional radio link. The sensor is controlled by one of my Calunium v2 microcontroller development boards. I'm using a pair of RFM12B radio modules operating at 433MHz to emulate a transparent serial connection. One is fitted on  the Calunium board and the other radio module is connected to a Raspberry Pi via my RFM12B shield. The Pi records the data and is responsible for uploading it for general access. I am also reusing most of the AuroraWatchNet firmware, which means I already have signed data communications and the capability to deploy over-the-air firmware updates - quite a good starting position for a new project!

The biggest challenge I expect to face with this project is waterproofing the sensor. Although it is hermetically sealed there is no easy way to deploy it outside. As explained in a previous post, only a few materials are transparent to long-wave infra-red emissions and the better ones are toxic, water-soluble or expensive. I am therefore trying to avoid covering the sensor window and instead keep the electrical contacts dry. My first attempt was to drill a hole in the box and attach the sensor with silicone sealant. The mechanical fixing lacked strength and I wasn't convinced I had completely sealed around the sensor. To make matters worse I ended up with sealant on the sensor window which had to be cleaned off before it set. Another approach was required.

The new approach is to fit the sensor inside a cable gland. Before doing so I had to attach wires to the sensor connectors and insulate with heat-shrink sleeving. The result is shown below. 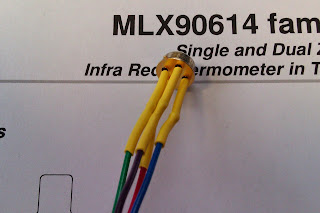 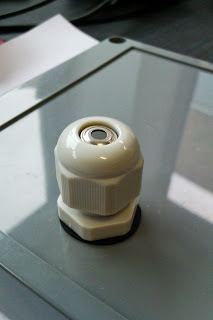 The other end of the wires can then be soldered. For the prototype the wires are soldered to a small piece of stripboard. The stripboard has two pull-up resistors for the I2C bus and a decoupling capacitor. There is also an IDC connector to link the board to the unused JTAG interface. This was the easiest way to connect to a stock Calunium v2 board. For the lowest power operation the sensor is powered from logic-level output and I am using software I2C so all connections can be grounded when the sensor is not in use. The real-time clock on Calunium is connected the the hardware I2C interface on the microntroller and can be operated independently of the sensor. 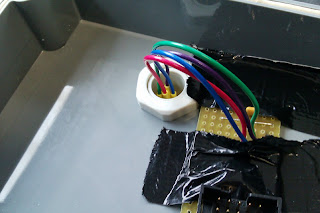 The box and cable gland are rated IP65. Hopefully the result will be waterproof

The sensor is now deployed outside and reporting back to the Raspberry Pi base station. The transmitted packets are logged by the Raspberry Pi but as yet I don't have a convenient way to extract the ambient and object temperatures for analysis. That is the next task.